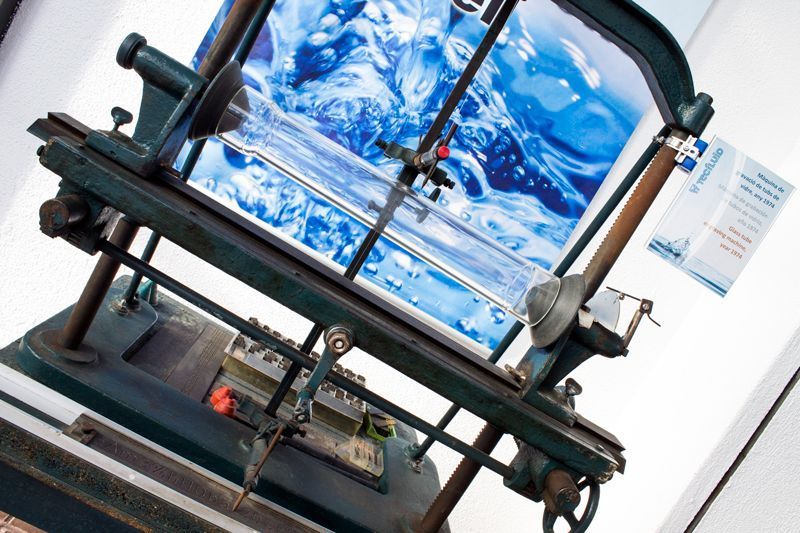 The engraving of scales in the glass tubes by laser is a process relatively recent. How were the scales engraved in the tubes of variable area flowmeters before these machines would exist? We immerse ourselves in our history!

In case you do not remember the date 😉 , in Tecfluid we have been manufacturing flow and level measurement instruments since 1974. Things have changed a lot since then and we are surprised many times to see how the processes have evolved with the incorporation of new machinery.

Today we show you one of the machines that were used at the beginning of our history for the engraving of the scales in the glass tubes of the variable area flowmeters.

In fact, it is a kind of “pantograph“; an articulated mechanism used in the field of mechanics that is used to manually copy drawings or reproduce them on a different scale.

In the case of glass tubes, these were first calibrated in the calibration flow rig in order to mark the points of the scale on the glass. Then the tube was impregnated externally with liquid wax that was allowed to cool before placing it in the engraving machine.

In the lower part of the engraving machine the “types” or metallic pieces, that formed the line of text to be engraved, were placed in an almost artisanal print mode of that time.

By means of the shafts and jagged wheels connected, the operator moved the glass tube manually from right to left (or vice versa) and rotating it, as necessary, to draw the lines of the scale with a kind of nail-needle in the solidified wax.

The texts formed by letters and numbers were placed in the lower part of the machine and were reviewed with the needle, reflecting them with the needle located in the upper part where the tube to be engraved was placed.

Once the text was “etched” on the wax, the tube was introduced for some time into a solution of hydrofluoric acid allowing it to engrave the spaces in the glass not covered with wax.

Subsequently, the tube was subjected to a process of removal of the wax, with the desired scale and text being engraved and covering them with a special paint for a better visualization.

As you see, totally handmade! 🙂

In our days, the engraving of scales in the glass tubes of our flowmeters has little to do with what we have just explained. Do you want to know how this process is currently done with laser engraving machines? You can see it in our article “How glass tubes of variable area flowmeters are engraved” Which includes a demonstration video.

Tecfluid S.A. are a company that design and manufacture flow (flowmeters) and level measurement equipment with more than 40 years of experience.

This website uses its own and third party cookies in order to analyze statistical information on the browsing thereof and the traffic generated on the website.

This website uses cookies so that we can provide you with the best user experience possible. Cookie information is stored in your browser and performs functions such as recognising you when you return to our website and helping our team to understand which sections of the website you find most interesting and useful.

Strictly Necessary Cookie should be enabled at all times so that we can save your preferences for cookie settings.

If you disable this cookie, we will not be able to save your preferences. This means that every time you visit this website you will need to enable or disable cookies again.

These cookies belong to Google Analytics and collect user preferences and browsing information.

Please enable Strictly Necessary Cookies first so that we can save your preferences!